The City of Los Angeles (City), in conjunction with the U.S. Army Corps of Engineers (Corps), prepared the Final Integrated Feasibility Report (IFR), which includes the Final Feasibility Report and Environmental Impact Statement (EIS)/Environmental Impact Report (EIR) for the Los Angeles River Ecosystem Restoration Project, known to some as the ARBOR project. Congress Authorized the project in the Water Resources and Development Act of 2016 and Los Angeles City Council adopted the Study on June 29, 2016.

Since that time, the City has taken significant steps forward to achieve the project goals. The City purchased the 42-acre brownfield-designated G2 parcel at Taylor Yard in 2017, which represents a major step towards the revitalization of the LA River. The City embarked on a two year process to investigate the existing conditions and gather input and ideas from the local community about the Taylor Yard G2 site that is summarized in the Draft Implementation Feasibility Report released in March 2021. Hearing the desire of community to ensure consistency and coordination at Taylor Yard, the City has facilitated the formation of the newly-constituted 100 Acre Partnership between the the California Department of Parks and Recreation (State Parks), the City of Los Angeles and the Mountains Recreation and Conservation Authority (MRCA) and covers the G1 (Bowtie), G2 and Rio De Los Angeles State Park parcels. The Partnership is committed to collaborating on design and securing funding for much-needed improvements to G1 and G2 and the sports fields and amenities at Rio de Los Angeles State Park. More information about these specific initiatives can be found here.

The City applied and the Corps designated the LA River Ecosystem Restoration Project as a P3/Alternative Delivery pilot project in 2020 to develop approaches to deliver the project faster and with great flexibility. The project will use a split delivery approach, in which the City takes upon more responsibilities that will accelerate project completion, enhance efficiency and reduce unnecessary redundancies in project delivery. This novel approach will accelerate delivery to complete a majority of the project benefits by 2028, lower total project costs, maximize the federal return on investment, and generally produce better value for tax-holder dollars.

The Ecosystem Restoration project includes creation and reestablishment of historic riparian strand and freshwater marsh habitat to support increased populations of wildlife and enhance habitat connectivity within the study area, as well as to provide opportunities for connectivity to ecological zones, such as the Santa Monica Mountains, Verdugo Hills, Elysian Hills, and San Gabriel Mountains.

Restoration includes the reintroduction of ecological and physical processes, such as a more natural hydrologic and hydraulic regime that reconnects the river to historic floodplains and tributaries, reduced flow velocities, increased infiltration, improved natural sediment processes, and improved water quality. The proposed Project also includes opportunities for passive recreation that is compatible with the restored environment.

The City has prepared a "Reader's Guide" in both English and Spanish to help explain the key points of the Study. The guide is available for download here: 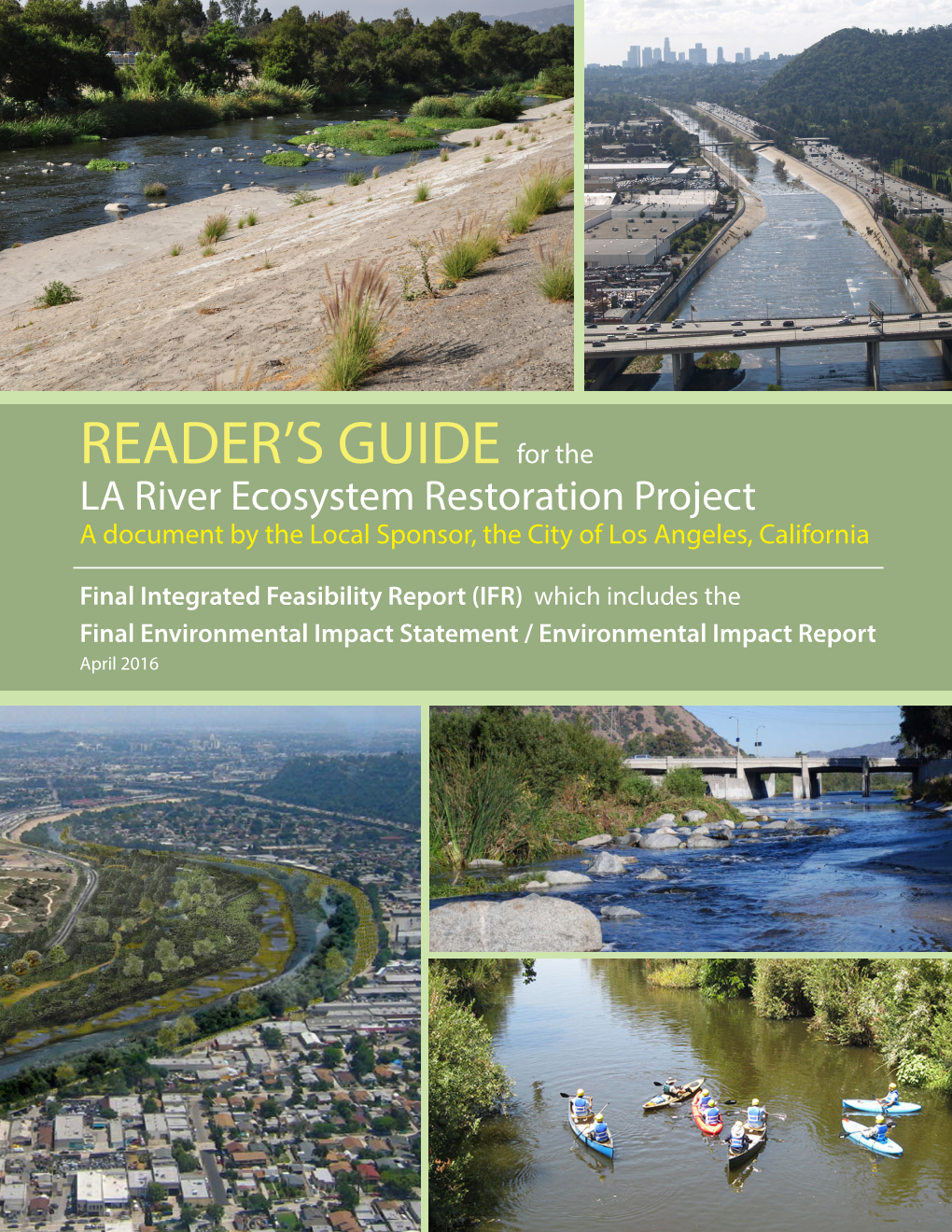 Certification of the Final IFR and approval of the proposed Project will require consideration by the City's Board of Public Works, City Council Committees, and full City Council. The IFR will be considered by the Board of Public Works on Wednesday, May 25, 2016 at 10 am. The City Council meetings have not yet been scheduled and are expected to be held during Summer 2016. Please note however that this schedule is subject to change. Schedule updates will be posted on this website and the Bureau of Engineering's Environmental Management Division website: http://eng2.lacity.org/techdocs/emg/lariver.htm. In addition, the official schedule and meeting agendas for the City Council and Council Committees are available at the City website: http://www.lacity.org/government/ElectedOfficialOffices/CityCouncil/CouncilCalendar/index.htm

The US Army Corps of Engineers is also hosting the Integrated Feasibility Report files on their website.

Habitat restoration is one of the main goals of the Army Corps Feasibility Study for the Los Angeles River.

Bird species of special concern found along the River Corridor include:

According to the California Coastal Conservancy, close to 100 percent of the original wetlands and 90 to 95 percent of in-stream riparian habitat within the Los Angeles River watershed have been lost, a consequence of urbanization and the channelization of rivers and creeks. Within the 32-mile Los Angeles River project area, the only areas that presently support riparian habitat are Sepulveda Basin and the Glendale Narrows. These areas are increasingly stressed by exotic species, hydrologic modifications, dumping of trash and debris, and encroaching development.

The 225-acre Sepulveda Basin Wildlife Preserve is the only officially designated wildlife area along the River, within the City. The soft-bottom portions of the River here and at the Glendale Narrows provide valuable resting and feeding zones for migratory birds, yet these areas are seasonally inundated with high flows, which often preclude nesting. Key indicator species found within these areas include a variety of mammals and birds, such as coyote, shrike, acorn woodpeckers, and California quail. Urban runoff and sewage treatment plants provide a majority of the water flowing in the channel; and this nutrient rich water supports unique riparian ecologies along the River.

Riparian habitat is also often impaired by degraded water quality (for example, increases in water temperature, the quantities of sediment and nutrients, and pesticides and heavy metals), and elimination or reduction of adjacent "buffer habitat." Because functional riparian habitat and wetlands can improve water quality by removing or sequestering many contaminants, the loss of this habitat has implications for the ecological functioning of the River, as well as for wildlife uses. In addition to the largely disconnected riparian habitat along the River corridor, upland and riparian connections to mountain areas are largely absent, except along Verdugo Wash. Restoring and reconnecting both riparian and upland habitat, and recreating wetland areas where feasible, would contribute a great deal to the restoration of a functional ecosystem along the River. Some potential wildlife connections at critical conservation areas such as from the Arroyo Seco to Elysian Park and Griffith Park to Verdugo Wash would also enhance connectivity.

The steelhead trout is a hardy fish with powerful survival mechanisms; the main barrier to the steelhead trout’s "recolonization" of the River is not temperature or water quality -- though these remain factors -- but an unimpeded path from the ocean to the headwaters, along with areas in which to rest and spawn. Such an unimpeded pathway would require removing enough of the concrete within the channel to allow a fish to journey from the ocean to the headwaters, via a system of pools, riffles, runs, and gravel. Significant riparian cover or other mechanisms would provide shade, and a natural flow regime of high and low-flows would be necessary.

The Los Angeles River watershed includes three regionally significant ecological areas (SEA’s) that are disconnected from the River corridor, these are: the Santa Monica Mountains, Verdugo Mountains, and Griffith Park. As noted in the Los Angeles County’s 1996 Los Angeles River Master Plan, migratory and resident birds move along the major flyways between the River, the SEA’s and other sites with surface water such as Hansen Dam, and the Sepulveda Basin. Open freshwater reservoirs such as the Los Angeles, Pacoima, Encino, and the Tujunga also offer feeding and nesting grounds. According to research by the University of Southern California’s GreenVisions program (2006), the channel and rights-of-way currently function as movement corridors for mammals.